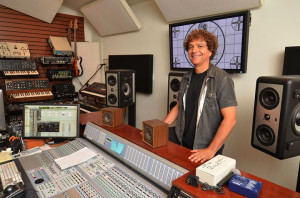 Pictured in his studio with the Barefoot MM27 monitors is award-winning composer Anthony Marinelli. Photo by David Goggin.

Marinelli has composed music for thousands of commercials including over 30 Apple Computer spots, spots for Microsoft, Nike, Mercedes-Benz, Chevrolet, Budweiser, Jaguar, Southwest Airlines, Boeing and the iconic This is your Brain on Drugs campaign. He’s been honored with numerous Clio, Silver Lion, Belding and Addy awards.  He revolutionized post production workflow as co-originator of Levels Audio Post. By integrating a new style of mixing music and sound for picture, it quickly became the industry’s fastest growing and most in-demand facility. His state of the art complex located at the historic corner of Hollywood and Highland was the first choice of discriminating projects such as American Idol, The Bachelor, and the VH1, ESPN, Teen Choice and MTV award shows.

Barefoot:        How did you first hear about Barefoot Monitors?

Marinelli:        I was working with producer Aaron Heck on some projects and he told me about these speakers. I tried them out and loved them.   I went on to score writer/director Tedi Sarafian’s upcoming film “Altergeist” and have used these Barefoot monitors on everything I’ve worked on since then.

Barefoot:        Is there something special, unique or important in your work that fits well with the Barefoots?

Marinelli:        Before I got the Barefoots, I had 4 pairs of very high-definition monitors. I had 8 of them, because I rotate them into the 5.1 arrays I’ve had since I bought the first pair from Michael Jackson. They were his speakers and I just liked them and never could find any replacements. Then the Barefoots showed up and they were the first speakers that truly spoke to me and said I’m your new speakers.

Barefoot:        Does this have something to do with your comfort zone while you’re working, as well as a sound that will work where the material is played elsewhere?

Marinelli:        Yes. The sound of the Barefoots translates the best. It doesn’t hype the sound when I’m recording. It gives me the full audio spectrum from lows to highs. They’re very quick. The transients are very rapid.  I deal in a lot of different genres of music and it’s not like I use a certain kind of speaker for one kind of music and another kind of speaker for another.

These speakers are just the truest that I’ve ever come across.

Marinelli:        It’s across the entire spectrum. I have an array of analog synthesizers that have very sharp transients and I record live musicians all the time. I record orchestras. We mix that here. I do a lot of vocal recording and a lot of ethnic vocal recording with some of the best singers in the world and they don’t complain. They want to know how I’m making them sound so good. We just hang a mic and they hear the results through these speakers.

Barefoot:        You said there’s no hype, which would artificially enhance the sound?

Marinelli:        Yes, you pay now or you pay later.  If the monitors make it sound better now, then I go somewhere else and it doesn’t have that enhancement, then I’m going to pay, because I’m going to be missing something or there’s going to be too much of something, whether it’s low or mid or high.

Marinelli:        That’s a sizzle reel for the musical that I’m co-creating with Amrita Sen. It’s called BollyDoll.  We have 15 dancers and we choreograph the show here at my studio in front of a wall where we project animation. The show is fully animated with dancers, vocalists and a live band. We’ve attached some producers and we’re developing a travel show we’re going to be performing at the Deepak Chopra Center. We’ve performed the full length version of it in L.A. and in New York and hope to be opening on Broadway with the show.

Barefoot:        What percentage of your work is for film?

Marinelli:        It varies, depending on when you ask me. I just finished a film and when I’m doing a film, it’s pretty much 100% of my time while I’m doing the film. Now I’m 100% of the time on the Broadway show. I kind of just stop and attack everything 100%, but over the years, I’d say about 50% of my time is spent scoring films and then the rest is finding cool projects or people will call me up that are doing something or other or there’s a director doing a commercial that wants to work with me. Basically, people know of me and want to work with me, so fortunately, I can choose.

Barefoot:        Can you mention a few of your most valuable instruments and recording gear?

Marinelli:        Oh, sure. My most valuable are my two ARP 2600s — Jerry Goldsmith owned one of them and it was used on a lot of classic movies.  I used all of these synthesizers when I was working on “Thriller” with Michael Jackson, so they’re all valuable to me. I have a Linn Drum machine, a Jupiter-8, a Prophet-5, a Minimoog, an MS20, an ARP Omni.  My Doctor Click is really valuable to me for syncing all these various instruments and driving quick tracks and creating pulses. I have an ARP sequencer and then some old tape echoes that I really like to use, like the Roland Space Echo and the Echoplex. I also have a Roland Vocoder.

I also have a Clavinet Pianet Duo that I use all the time, a Fender Rhodes 1973 Suitcase that I use a lot and then I have my most prized instrument, a 9-foot Concert Grand piano, handmade piano and given to me by David Abell.  It was the piano that was used for all the Disklavier recordings, so hundreds of the world’s greatest pianists have performed on that piano and many of them here in my studio.  Pianists want to play on this piano, so they come here and we record it to it’s internal Disklavier recorder.  We also do a parallelanalog recording, and it’s a pretty amazing instrument. I’ve been told It’s the best 9-foot concert grand Yamaha’s ever made.

Right next to it is a 1905 Mustel Celeste, which I love. I got that from the Joffrey Ballet, which inherited it from another ballet company in Los Angeles. These instruments have a great history.   I got my Prophet-5 from the L.A. Civic Light Opera, which was from a time when L.A. used to originate musicals. it was the Prophet they acquired in 1980 from “A Chorus Line,” I believe.

Barefoot:        When these world famous musicians come here to record, you probably bring them in here to the control room to do a playback on the Barefoots.  What’s the response?

They say that their music sounds great, like they’ve never heard it so good before. They bring out the detail. It’s as close as you can get to hearing a live performance. When you’re in here listening to the Barefoots, you get a really strong natural emotional response to the sound. That’s what musicians respond to.