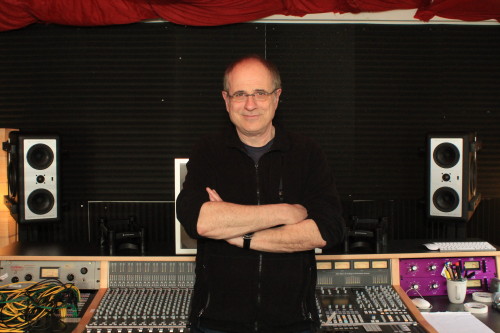 Pictured in his Nashville studio is producer Bob Ezrin with his Barefoot Sound MM27 monitors.

Ezrin first encountered the Barefoot monitors during a demo at Electric Lady Studios in NYC. The choice of music to listen to was Pink Floyd’s “The Wall,” which he co-produced.

“I found the Barefoots to have exceptional depth of field and width of imaging,” he recalls. “The sound is very clear, distinct and remarkably colorless. It was easy for me to hear every single component of the mix, just the way it was intended to be.”

In an illustrious career as a music and entertainment producer that has spanned over 40 years, Toronto-born Royal Conservatory alumnus Bob Ezrin has worked in virtually all genres and media with many of the world’s most celebrated contemporary artists, including, Pink Floyd, Alice Cooper, U2, Peter Gabriel, Deep Purple, Lang Lang, Jay-Z, Taylor Swift, K’naan, will.i.am, Zucchero, Green Day, Elton John, Lou Reed, Rod Stewart and many others.

“I love the way the Barefoot monitors get loud but they don’t hurt,” Ezrin continues, “unlike many so-called professional speakers that sound really great at very low levels and then terrible at high levels, or the other way around, fantastic at high levels but horrible at low levels. The Barefoot’s sound consistent at whatever level one is listening. I like them because they’re clinical and not colorful. They make me work to get all the color, all the definition, and all of the essential components of the mix. They just give me a true picture of what it is that I’m doing.”

Ezrin has produced numerous major events including the re-opening of the SuperDome after Katrina and Pete Seeger’s 90th Birthday Concert at Madison Square Garden. Among numerous film and TV projects, Ezrin produced the award winning film “Fade To Black” starring Jay-Z, Beyonce and a wide variety of urban artists. His monitors must perform with a vast variety of musical sounds.

“The Barefoot’s have proven to be ideal speakers for any of the genres of music that I work in,” he adds. “They love bottom ends, they’re crispy-clear on the top end. They have great depth and breadth, and they give the truest representation of what I’m building and creating.”

Ezrin is also an innovator and entrepreneur having co-founded The Nimbus School of Recording Arts in Vancouver, B.C. in 2009 and Beat Kangz Electronics, a hip hop musical instrument manufacturer in 2008. He is a governor of the Nashville Symphony Orchestra, vice chairman of the The Mr. Holland’s Opus Foundation, an advisory member of MusiCounts and, along with U2′s the Edge, a co-founder of Music Rising, an initiative to replace musical
instruments lost in natural disasters. He is also a past trustee and governor of The Recording Academy.