Sound supervisor, sound designer & mixer, Scott Martin Gershin is one of the most prolific post-production artists in Hollywood. With a career that spans over 3 decades, Scott has been involved in some of the biggest productions in the movie business that includes Nightcrawler, Pacific Rim, American Beauty and Kill Bill to name a few. Always staying on the cutting-edge and pushing the latest technology trends make Scott Martin Gershin a master of his craft.

In Scott Martin Gershin’s Own Words

I think there’s a point where you get in your career where you transcend the gear. It’s like playing an instrument, you’re no longer thinking about how do you play a technically, but what do I go from my brain to my fingers, to my hands and I’m no longer thinking how, but why? Why am I making that decision? Now all of a sudden it just starts flowing and the ideas come. And I think that’s what the closest thing I can ever think of being a master.

When I was younger, I think I wanted to go into one of two things. I wanted to either go into visual effects or sound. I’ve always been affected by sounds. I think when I saw Star Wars as a kid, I loved it. It just moved me. So to me, music and sound is ways of telling a story. I’ve always been into hearing everything and finding it fascinating and pleasurable. When I listened to sounds and I’ve listened a lot of progressive bands when I was younger and I’d love to hear the instrumentation of what they were doing and what instruments were they doing, how were they doing it, what kind of delays or kind of reverbs, and it just started listening to how the sounds were built and they would also affect me emotionally. It just drew me into that. 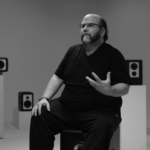 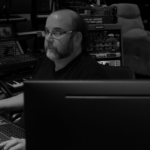 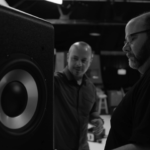 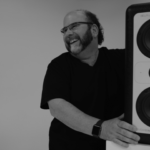 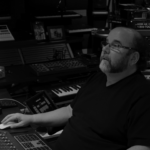 I need to be able to handle complex sounds really well. So I did that and I just fell in love with the Barefoots.

I think of myself as a storyteller and what I love to do, whether I’m doing movies, games, or VR, I like to get into the director’s head, I want to understand the story that he wants to tell. Then that enables me to start hearing sounds in my head. When I go in, I like to figure out how to use my trade, my craft, my tools with sound, and to help embellish and to help better tell that story. Understanding how the dialogue is going to go, how the music is going to go, how do we want to be spatial? Do we want to go intimate and be mono and just bring the audience and bring the volume down so people will listen forward for whether we want to do something really big, shake the room and take people on an E ticket ride.

When I choose a monitor, and I’m really picky. I love speakers and have spent a lot of time with many of them, clarity is huge. Because I’m making so many decisions are on reverbs, how I’m doing my delays, I need a certain amount of punch and need the speaker to translate to all the mediums that I partake in. I need the flexibility to understand what the speaker is because ultimately it’s my ears. That’s the way I start listening, that’s the way I hear all sounds and that’s how that soundtrack and that sound is going to translate into the real world. I need that speaker to be able to be translatable to the mediums that I work in.

I went through and I auditioned probably 15 different speaker manufacturers and I also did some blind tests with some friends and we kept going back to the Barefoots. Part of what I do is noise based, so it’s not fundamentals, it’s not going to sing with a melody or a single tone. I need to be able to handle complex sounds really well. So I did that and I just fell in love with the Barefoots. They’ve been working with me now for six years, at least. I did Pacific Rim with them and I did Nightcrawler and so many different movies and VR titles and games. That, it’s just been wonderful and the translation has been really great. So when I make those decisions on using those speakers, I’m never usually shocked on how they’re going to translate to the outside world.